The LV is a smaller version of the Zegul Arrow Play MV. It is a sleek and elegant performer with excellent maneuvering and playing capabilities.

The Play LV gives the smaller paddler a tighter fit resulting in high control over the kayak. The hull has a high degree of rocker and a fairly high volume in the bow. The mid-section has a slightly rounded hull profile making it very smooth form edge to edge. This combined with the hard chines makes the Play LV a joy to paddle. The edge is rock solid and the Play LV has a very nice glide though the water.

The most important keywords describing Zegul Play LV is versatility and fit – it fits the smaller or athletically built paddlers of almost all skill levels. It is stable without sacrificing maneuverability and speed.

We took the well known, Arrow kayaks developed Rock Solid construction and improved it even further. We decided to add another layer of glass/kevlar, making the laminate even stronger and stiffer.

The positioning of the pure kevlar keel strip was modified to give even better results. We also made improvements on the outer finish of the keel strip for a smoother and more even result. After thorough tests we are convinced that it is a success! 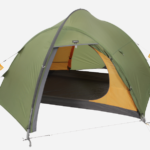